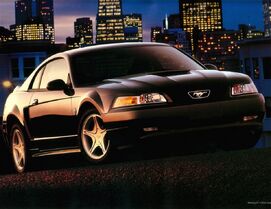 "Great acceleration, but weak durability.  The Mustang Cruiser is great... if you can avoid the lamp posts." - Vehicle Description

The Ford Mustang Cruiser is a default car unlocked from the very first time you play Midtown Madness 2 or the original Midtown Madness (only in Multiplayer mode when playing a Cops & Robbers challenge). It is almost identical in appearance to the Ford Mustang GT, which is the standard version of the car. Mustang Cruisers are also used as standard police units in both London and San Francisco.

London Mustang Cruiser
Add a photo to this gallery
Retrieved from "https://midtownmadness2.fandom.com/wiki/Ford_Mustang_Cruiser?oldid=12317"
Community content is available under CC-BY-SA unless otherwise noted.